We'll strive to please you every day

For Frances, on the theme of travel.

I miss London immensely, mostly for my marvelous friends and the fabulous museums. My favorite birthday in London was a guerilla birthday in the Silver Galleries of the V&A – no drinks, no food, just beautiful objects and a lot of talking amongst very intelligent people. The security guards only approached us once to ask why we were lounging in the window seats, and I made up some story about giving an impromptu lecture and waiting for some stragglers. They accepted it because my accent indicated I was a teacher and I was standing at the time with my three sixteen-year-old English friends, and all seemed legit. There are many stereotypes of Australians in London at are not flattering, but the one that we are mostly teachers is a positive one.

Unfortunately for me, I was not much of a fan of theatre in London, so I never roused myself to attend a single play in the West End bar Wide Sargasso Sea in the first two months and the essential Shakespeare at Stratford Upon Avon and The Globe. Thankfully my years working with the mighty actors of Perth turned me from a theatrical philistine to a fully paid up fan girl of live theatre. I even, god help me, dabbled in the art of writing plays myself this year. And although I am not in London, I can still see some of the best of London stage in Perth.

In four weeks I have seen Henry V and Twelfth Night from The Globe and This House from NT Live, and mighty productions they were too. I love how The Globe makes Shakespeare a cross between a rock concert and a comedy set, I love the groundlings' interacting with the actors and the many talents on display on the stage. When you stand as a groundling you are traveling back in time to an age when stage plays set the mood of the crowd, when the language soared up taking all listeners with it. The spectacular This House, written by James Graham (born only a year after me) and in production impressive beyond my limited experience to capture, was close to perfect in every way and produced in me a moment of utter respect for such a young writer able to capture the feel of a very difficult time before his birth.

At the start of any filmed theatre production the stage acting on screen is difficult to get used to, but like Shakespeare, you get used to the theatricality and soon you are so engrossed in the play you forget you are not in the theatre yourself. When watching theatre on film in Perth I like to watch the audience as well, because I will always see some interesting people. For This House the audience was made up mostly of the older set, the people who grew up with live theatre on an equal footing with TV and Film and grew up during the time depicted on stage. They included my much beloved English Literature teacher from school and the only State politician that recognizes me in the street because her daughter and I have argued with each other since we were six years old. Of the young there was a short story writer from my writers group and two friends who are also talented actors.

It doesn’t take much to travel far from the place you are sitting, all it takes is a willingness to abandon yourself to the magic of another person’s story. I am frequently in the theatre alone because, as with attending museums, not many people outside the theatre industry have my voracious and universal appetite for narrative. But once in the theatre, I am seldom surrounded by strangers only, and by the end, we have all experienced something unique together, and we are friends, if only in the spirit of the moment.


Theatre on Film in Perth

Posted by Claire Madeleine at Saturday, June 22, 2013
Email ThisBlogThis!Share to TwitterShare to FacebookShare to Pinterest

The general rule hereabouts is that you may want to do as I say, not as I am pictured doing. 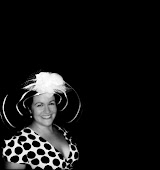 Something I prepared earlier

Claire Madeleine
When I grow up I would like to be an actress in karaoke video clips by day and host of University Challenge by night.